Nadia visits the museum “Gemäldegalerie“: In the last week, July appeared with a real autumn feeling so I was really pleased to get an invitation of the „Staatlichen Museen zu Berlin”.

This invitation took me to the golden era – the exhibition „El siglo de oro“ at the museum “Gemäldegalerie”. The era of Velázquez, the golden age of Spanish art, remains one of the most important and popular chapters in European cultural history, the exhibition flyer informs me.

The exposition opened on 1st of July and runs until 30th of October, 2016. „The Siglo de Oro (Spanish Golden Age, "Golden Century") is a period of flourishing in arts and literature in Spain, coinciding with the political rise and decline of the Spanish Habsburg dynasty”, Wikipedia lets me know.

Considerung the tableaux, I liked very much the still lifes: Vegetables dangle downwards from strings, fruits and poultry in the pant 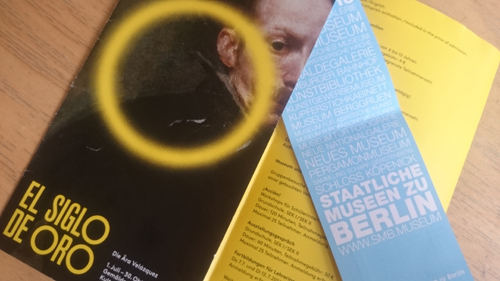 ry. Shadows and lines show the observer the perspective of the small room and perfectly illustrate the pantry. And the sculptures inspired me: They seem to be alive and this is really amazing as they were build so many centuries ago.

From the organisational point of view I really appreciated the way the museum guide made the tour: Every visitor received a small loudspeaker which could be fixed at one ear, the receiver could be put around the neck. The guide spoke into a microphone and via radio the speech was transmitted to the group. The advantage with this gimmick is not only that the particular listener can be some steps away and still understands everything really well, but also for the other visitors of the museum. Because the guide can speak very quiet and is audible, however; also explanations towards the tableaux - when the guide explains something and by way of example leads with his hand to a special detail in the painting - are highly understandable. Occasionally, I turned down the volume of my loudspeaker just to listen what the other visitors in the room can hear from our lecture – nothing! The guide can speak really very quiet and reach the group optimally nevertheless.

I took advantage of a personal guide in the exposition, but I learnt that also the audio guide is quite interesting: All the Germans can take advantage of the voice of Daniel Brühl who’s a pretty famous German actor (with Spanish roots). The audio guide is available in German and English, guided tours are possible in - if I remember rightly - seven different languages if you book for a group.

I wasn’t allowed to use it, but I’ve seen it: For children there’s a special audio guide and they also get an accompanying booklet COMPAÑERO (companion), a drawing book for children from 6 to 12 years. Unfortunately, I don’t know if this is available in other languages than German, but fortunately painting is international.

Résumé of my visit: definitely recommendable.

Have fun and many golden moments in “El siglo de oro“.